I know that many of you have been waiting for this post.  I am going to do my best to explain everything and help to answer questions about Canine Companions for Independence.  I thought that it might be best to do it in a question/answer format.  Here we go.

While at Pet Smart for our second field trip during class, Ryan spelled:  TOO HAPPY TO BE A DOG OWNER AT PET SMART.

When I asked him if he wanted to have her crate in his room, he spelled:  YES TO HAVING HER IN MY ROOM BECAUSE CALLING IT WE NEED TO BOND.  LIKE TO THINK IT IS MEANINGFUL TO SLEEP IN THE SAME ROOM TOGETHER.  After two days though, he decided that he wanted privacy, so Freckles has moved to the living room. 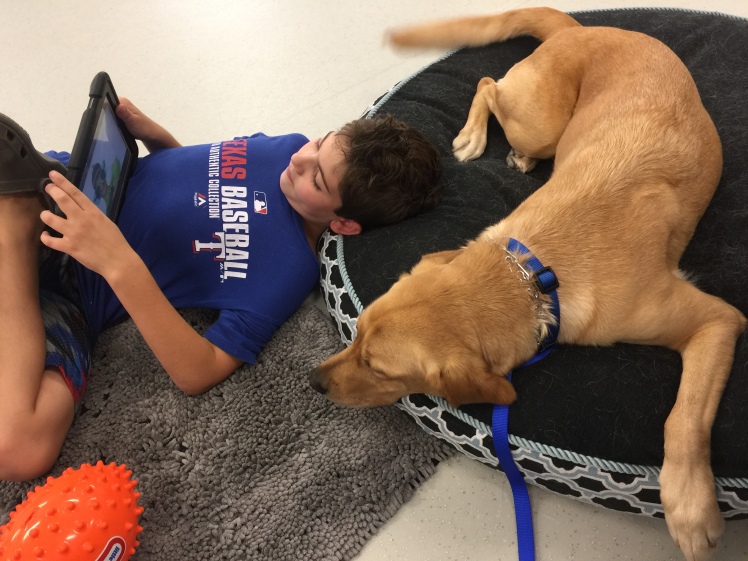 After an outing at Walmart, Ryan spelled:  EACH TIME WE GO OUT IT IS FEELING MORE COMFORTABLE.

When I asked him if he wanted to go with me to vote, he spelled:  MEANINGFUL TO ME TO GO.  IT IS TOO IMPORTANT.  I then asked him if we should take Freckles (it is still a work in progress to take her out to places but we have really been trying to take her almost everywhere).  He spelled:  KIND OF BECAUSE WE ARE A TEAM SO YES.

The other day, out of the blue, Ryan spelled:  FINDING IT TOO DEARLY AWESOME TO HAVE A DOG.  TOO LIKING BEING A DOG OWNER.

And he spelled:  MOM I AM ALWAYS GOOD TO HELP PRACTICE COMMANDS.

Another time he spelled:  TOO HAPPY TO SPEAK WITH MY DOG IN PUBLIC SOON. (Referring to two upcoming local speaking engagements).

When Ryan and I sat down to have him add to the blog post, here is what he said (which oddly enough, resembles what he spelled at the Graduation Brunch I think!):

CARING TO THANK CCI FOR PROVIDING ME THE OPPORTUNITY TO HAVE A SKILLED COMPANION DOG.  TOO MEANINGFUL TO ME TO HAVE FRECKLES.  HARD TO PUT INTO WORDS.  WILLING TO TOTALLY SAY REALLY KIND OF GOOD TO HAVE A CARING DOG TO “CALLING IT” BE MY BEST FRIEND.  MOM, I AM TOO LOVING FRECKLES.

I hope that this long summary helps answer any questions that you might have.  Please feel free to let us know if you have any more that we can answer.  CCI is fantastic and if you know someone with a disability, please have them look into it.  I would be remiss if I didn’t at least mention that this organization truly does provide these dogs free of charge and they rely on the generous donations from members in the community and from the time of caring volunteers.  If you want to donate to a worthwhile cause, please check them out.

23 thoughts on “Canine Companions for Independence”