Ryan has been really into creative writing with Adriana lately.  He has recently written two of my favorite stories to date!  I honestly love how he incorporates what is going on in his life and weaves it into the stories.

Here is one that he started with by spelling:  THINK THAT I HAVE TO TELL A STORY.  A STORY ABOUT BEING A SOON TO BE TEENAGER.

THERE ONCE WAS A TINY BOY THAT NEVER GREW.  THE TINY BOY THOUGHT THAT HE WOULD BE TINY FOREVER.

ONE DAY IT OCCURRED TO HIM THAT HE TURNED THIRTEEN THE NEXT DAY.  IN HIS MIND, TEENAGERS HAD TO BE TALL AND HANDSOME.

THEN THE BOY HAD A DREAM.  THE DREAM TURNED HIM INTO THE TALLEST AND MOST HANDSOME TEENAGER THERE EVER WAS.  THE TINY BOY WAS NO MORE.

THE TINY BOY WOKE UP.  HE THOUGHT IT WAS A DREAM.  TO HIS SURPRISE, THE TINY BOY NEEDED TEENAGER CLOTHES NOW.  HE HAD GROWN AND IT WAS ALL HE WANTED AND MORE.  THE TINY BOY WAS HONESTLY SO HAPPY.

THE TEENAGER COULD NOT BELIEVE THAT HE GREW SO MUCH.  THE ONLY THING THAT HE DID NOT HAVE WAS THE MOST HANDSOME MAN AWARD.

THE MORAL IS TO BE HAPPY WITH THE “ME” THAT GOD GAVE YOU. 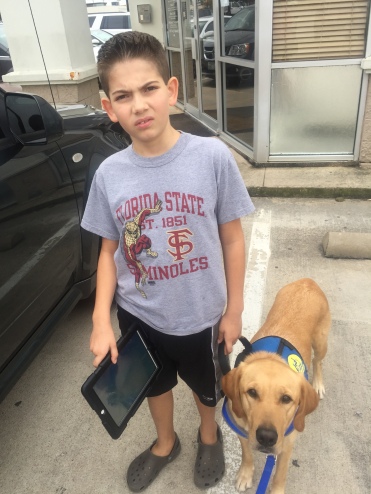 After a session with Adriana about the Monarch butterflies migration, Ryan told her that he had a fable that he wanted to write.

ONE DAY THERE WAS A HAPPY MONARCH.  HE HAD MANY, MANY GOLD BEADS THAT SPARKLED.  HE NEVER LEFT HOME LONELY.  GOLD BEADS KEPT HIM COMPANY.

IT THEN GOT COLD.  THE MONARCHS COULD NOT STAY.  IT THEN OCCURRED TO THE MONARCH THAT HE DID NOT HAVE HIS GOLD BEADS.  THE MONARCH CRIED, BUT HE HAD AN IDEA.  HE DID NOT NEED THE COLD.  HE COLLECTED MANY CRUNCHY LEAVES.  THEN HE MADE A TINY COOL HEADBAND OUT OF THE LEAVES.

THE HEADBAND HAD CRUNCHY LEAVES THAT SPARKLED IN HIS MEMORY.  HE WAS REMINDED OF THE GOLD BEADS THAT WERE LOST.

LONELY MONARCH GOT COMFORT IN THE HEADBAND.

THE MORAL IS:  MANY THINGS GET LOST SO YOU HAVE TO MAKE IT WORK.

*****
We went over our goals for the Fall during our last day of school before the Winter Break.  I was pleased with the progress that we made during the Fall despite many unexpected things that came up that we had to adjust our plans for.

Here are the goals and the results from the Fall:

3. Ryan will interview one person weekly for 30 minutes through December 2016. He will select the person and prepare interview questions and actively ask questions during the interview.
Result:  Ryan has done many interviews, but I don’t think that he had one a week (nor did he average one a week).  I am going to try and keep better track for record keeping purposes.

4. Ryan will participate in one field trip weekly by helping to pick the venue and following up with appropriate assignment after the trip (thank you card, blog post, report) through December 2016.
Result:  This was not met.  We did do some field trips, but I am pretty sure that it was not once a week.  We were thrown some curveballs this Fall with 2 unexpected trips for me (one to Washington DC for Grandpa Bob’s situation and one to Orlando for Ryan’s cousin Bobby), and two weeks of training for Canine Companions (which we were extended the invitation to the training in early September, after setting our goals).  I am going to try and keep accurate records of how many we do by June 2017.

5. Ryan will sit at the desk for work (RPM lessons and other work) for 2 hours on classroom days, broken up into 4/30 minute blocks through December 2016.
Result:  This is in progress.  Some days we met this, other days we did not.  We are going to try and work on this more.

6. Ryan and another family member or caregiver (other than Mom) will read 3 books together (novels or nonfiction) by December 2016.
Result:  Granny read one book and Dad read one book.  Ryan’s response when we were going over this goal was that:  FINDING IT HARD TO LISTEN TO OTHERS.  I explained to him that he still needs to work on this and try and tolerate other people reading to him.  He then responded:  LEARNING TO READ BY MYSELF WOULD BE GOOD.  We are going to try and work on this too as I know other RPM parents have been successful with this.

7. Ryan will sit to watch television (a documentary, movie, or the news) for 30 minutes at a time without getting up to wander around by December 2016.
Result:  We watch CNN Student News everyday for school.  This is 10 minutes long.  Ryan still has a lot of difficulty sitting, especially at home, for watching television.  We are going to try and start incorporating documentaries into our home curriculum and we have picked up doing Brain Pop lessons again.  These are short videos about educational topics that range from 2-8 minutes in length that have a short quiz after it.  Both Ryan and I really enjoy these a lot and he has asked for a subscription to Brain Pop for Christmas as we have almost exhausted all of the free episodes!

8. Ryan will climb to the top of a rock wall at Summit Gym by December 2016.
Result:  So we have gone rock climbing several times and this is still in progress for Ryan.  He certainly enjoys the free fall part after coming off of the wall, so it is a bit tempting to hop off!

We will be adding goals to include care of Freckles, stopping and getting on his bike by himself, some fitness goals with Special Strong and a few others in January.  We will keep you updated.

Merry Christmas, Happy Holidays, and Happy New Year from our family to yours!

5 thoughts on “More Stories by Ryan (They Keep Getting Better and Better!) and an Update on Our School Goals”