It has been a busy month of May for us so far.  Ryan, Freckles, and I ran in another local race in which we posted about on Facebook.

I was worried during and after this race.  The hills made it very difficult.  Ryan ran the entire first mile, but then had trouble after that.  At one point, he sat down during the race.  It is hard to know how much to push Ryan.  I do take his letter board every where we go, but to be able to spell at your thoughts in that type of situation is very difficult and tiring.  I also worry about the possibility of seizures.  I don’t think that I will ever stop worrying, but I do feel like I am pretty in tune with Ryan as to know how much to push him.  He wants to do these races and I have to remember that our only competition is ourselves.  The competitive person inside me thinks that we need to go for a personal best every race.  The realist in me tells that person to be quiet and know that every race that we run, Ryan, Freckles, and I are getting healthier and stronger.  Ryan still loves races and he is giving it his best.

I found out this past week that we actually ran more than a 5K that day.  I couldn’t figure out why that there was a discrepancy between the distance and my Fitbit.  I mentioned this to Randy on the way home from the race.  Well, a friend of mine has a son who is in the Keller High School Band, one of the participating bands from the event.  He and his dad ran the 5K.  My friend Stephanie told me that her husband said that it was the hardest 5K that he ever ran.  She also told me that the police were using a different map than the official course map and that everyone ran more than a 5K.  I knew it!  I mentioned in the video how there was an area that was poorly marked.  I also struggled with how different our time was from the last race.  I attributed it to the elevation, but we really didn’t too badly.  This was validation and I shared this with Ryan.

We attempted to run another race this past weekend.  This was called the Fort Worth Blacklight Race.  Our family was excited about this night time race.  Well, to say that we were disappointed would be the understatement of the year.  It was extremely poorly organized and the course was very dangerous.  Due to this, we did not even make it a mile before deciding to leave (after waiting for an hour to be allowed to start the race).  If you are interested in the full story, I would be happy to send you a private message containing the content of the email that I sent to the organization after the race.  I would never, ever recommend this race or the organization that put the race on.

I spoke to Ryan about it as I feared it might turn him off from doing future 5Ks.

YES.  WE ARE COOL TO DO MORE RACES.

“Thank goodness.  Ryan, you were so calm and patient.  I can’t believe that you were okay with waiting so long for the race to start.  How did you remain so calm?”

HARD TO TOTALLY BE CALM BUT I FOUND IT FUN TO BE THERE.

So there is the silver lining.  For the sake of being a positive person, I will leave you with the following cute picture (at least we got that).

Let’s talk about a well run event.  We entered Freckles into the North Richland Hills Dog Show.  Our whole family went to support Ryan and Freckles.  There were several events.  Freckles was entered into the Best Big Dog, Best Groomed, and People’s Choice events.

We are proud to report that Freckles placed third in Best Grooming!  This was our first time attending a dog show and we were thrilled with this.  Personally, I think that she should have gotten first, but I am a bit biased. 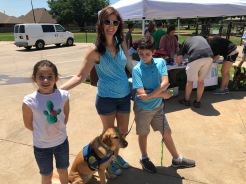 Here is what Ryan had to say about the event:
FOUND IT AWESOME.  I AM SO PROUD BECAUSE FRECKLES WON THIRD PLACE FOR GROOMING.  SHE IS A BEAUTIFUL DOG.  UNDERSTAND, MOM, GOING TO REALLY COOL EVENTS IS SO AWESOME.  I AM TOTALLY BOUND TO LOVE IT.

Speaking of cool events, for the second year in a row, we attended the Liberty Elementary School Carnival.  Grace had School of Rock practice that Friday night, so we got to the event a little bit late, but we made the most of it.

I sat down with Ryan to talk about this event.

“What did you think of the foam pit?”

REALLY AMAZING.  TOTALLY FAVORITE OF MINE AT THE CARNIVAL.

“What did you think of the carnival overall?”

REALLY LOVED THE CARNIVAL.  I AM ALWAYS HAPPY TO BE INCLUDED.

So this is the second time that Ryan has mentioned being happy to be included.  I asked him,”Why do you feel it is necessary to bring that up?  Are you concerned that you won’t be included?”

I MENTION IT BECAUSE I AM WORRIED THAT SOMETIMES I WILL BE LEFT HOME BECAUSE OF MY BEHAVIORS.

“Is it because you perceive the behaviors to be weird or hard for me to handle or something else?”

HARD FOR YOU TO HANDLE.

“Well, I try to include you in every experience that I can.  You don’t get to see your friends as often as either of us would like and I want you to have every opportunity to do fun things whenever possible.  Please don’t worry about that.  Even if it is hard, I am willing to do it.”

HAPPY TO HEAR IT.

“I think that you are doing amazing at all of these events, Ryan.  Really, you have made so many strides in the past few years.”

THANKS MOM, I HAVE A LONG WAY TO GO STILL.