It has been a busy month in the Curry household.  School is in full swing and we are still taking Ryan to Speech Therapy three times a week.  Ryan is also seeing his personal trainer, Lee from Special Strong, on a weekly basis now.  He attends Religious Education (R.E.) class and Mass on a weekly basis and he continues to see Adriana Barriga, of RPM of Texas, three times a week at home.  We also hosted Lenae Crandall of HEED RPM in the DFW area for 9 families at the beginning of this month.

We have seen a lot of improvements with Ryan.  Here are a few:

My plan for the rest of this month is to continue school work, plan some more field trips, and get Ryan back to 5K training since the weather seems to finally have gotten out of the 80s and 90s here in the Dallas/Fort Worth area.

Ryan turned 12 on October 6th.  He had a great birthday!  This birthday got me thinking about how his birthdays were in the past compared to how they are now.  If I am being completely honest, I used to dread Ryan’s birthday.  I didn’t know what to get for him, I didn’t know if he knew it was his birthday or if he even cared.  I saw it as him getting another year older and another year slipping away that I could not help him.  This makes me extremely sad to type this.  I know that there are some parents who are in my shoes today with these same thoughts.  Here is what his birthdays used to be like:

What I want to tell those parents is, it doesn’t have to be like that!  Ryan’s birthday is something that we celebrate with so much joy now.  He loves celebrating too.  The future is so bright for him and I truly believe that with hard work, the sky is the limit for him.

Birthdays Ages 8-12, with the end results being the observations this year:

I sound like a broken record, but RPM is more than just education and communication.  Ryan’s whole demeanor has changed.  It is not only a result of age and maturity as many other autistic 12 year olds would still exhibit the same observations that Ryan had prior to RPM.  I believe the difference is his quality of life is due to RPM.

When I read this post to Ryan, he replied the following:

YOU CAN SAY THAT BIRTHDAYS USED TO BE REALLY HARD FOR ME BECAUSE I WAS SO LONELY. NOW A REAL BIRTHDAY OCCURS EACH YEAR.  MOSTLY GRATEFUL THAT I CAN FEEL NORMAL WHEN IT COMES TO BIRTHDAYS NOW. 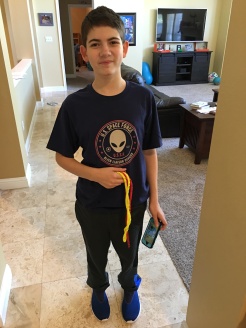 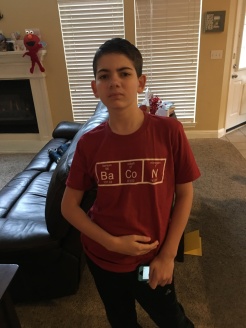 Clever shirt from Mom and Dad.

I am a firm believer that the world became a better place the day that Ryan Curry was born.  I don’t think that I am alone in thinking this.

9 thoughts on “Progress and a Birthday”