Ryan’s one request last weekend was for us to do his BASEBALL SCOREKEEPING LESSON.  I stayed up really late and finished the lesson and the next morning we did it together.  He was very engaged in the lesson.  I based the lesson off of the book from our reader Marcus B. (thanks so much again!!!) and used the scorekeeping sheets to show him some examples.  I asked him his thoughts at the end of the lesson.

TOO MUCH WORK.  I WOULD RATHER WATCH THE GAME.  I LIKE THE IDEA OF KEEPING SCORE BUT MY MOTOR SKILLS ARE TOO POOR RIGHT NOW.  MAYBE IN THE FUTURE I CAN DO IT.

Ryan is not able to hand write.  His fine motor skills are extremely poor so it would be difficult for him to keep score as he would likely have to spell out directions on scorekeeping and I would mark it.  I can see why he would feel this way.

Randy and I decided that before the season was over that we would try and take the kids to a Texas Rangers game.  We got some tickets for next Thursday night’s game.  I will let everyone know how it goes! 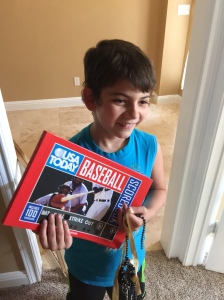 This week, in continuing with some art history, Ryan and I did a lesson on the painter Raphael.  We learned that Raphael took up painting after his father.  I asked Ryan what he liked doing with his dad.

Randy and Ryan do this a lot.  I mentioned to Ryan that we would be having a long car trip to Austin soon to see Soma next weekend.

PLEASE CAN I MAKE A REQUEST?

(At this point, I am so giddy that I can’t stand it as I love getting a glimpse of what he wants to ask me about!)

BEING SO SOUND SENSITIVE CAN I GET SOME NOISE CANCELING HEADPHONES WHEN WE ARE OUT IN PUBLIC?

I said, “Of course.  Do you think that you will be able to tolerate headphones on your ears?”  Ryan cannot stand having his ears checked at the doctor’s office and does not tolerate ear phones or ear buds when listening to his iPad.

“Have you ever worn them in school or therapies?”

LET YOU NOT BE DETERRED BY MY FAILURE IN SCHOOL.

I went out and got Ryan a pair at Home Depot (thanks to another smart parent for the recommendation!)  I asked him if these would work.  YES TO LEANING ON THEM AS NECESSARY. 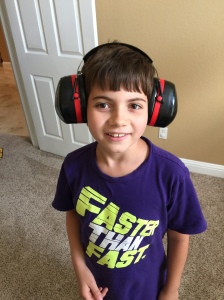 We continued the lesson and at the end I asked Ryan if he had anything that he wanted to say.

CAN I CALL MY UNCLE KEVIN SOON?

“Of course!  What made you think of him?”

HE IS SO KNOWLEDGEABLE ABOUT BASEBALL.  ALWAYS WHEN I SEE HIM HE IS COACHING A BASEBALL TEAM.

I then asked Ryan if he was excited about going to the Rangers game.

YES TO MY BASEBALL DREAM IS TO GO TO A GAME.

Right after that, I reached out to my Uncle Kevin and we set up a phone date for the following day.

Ryan prepared one question ahead of time:  GIVE ME AN IDEA OF WHAT IT IS LIKE TO BE A COACH.

YES TO LOVING ALL OF THE INFO.  I AM INTERESTED IN THE BASEBALL STATISTICS.  YES TO LIKING WHAT I HEARD.

Ryan’s attention span for things like this is about 20 minutes.  He was super quiet most of the call until the very end.  I mentioned to Uncle Kevin that it might be best to continue the conversation at another time, possibly the wedding.

YES TO CONTINUING AT THE WEDDING.

Ryan’s teacher sent home a worksheet last night.  It was from one of the third grade classes and she thought that it would be great for us to work on at home.  It was on maps, grids, and coordinates.

I started doing it with Ryan and adapted it so that he could answer with his letter board.  I quickly realized that he had already read the paper when I had left it on the kitchen table.  He answered the questions that I asked verbatim of what was on the worksheet.

I asked him, “Did you already read this?”

“Did you memorize it?”

“Really?”  I then proceeded to quiz him (which maybe I should not have done, but he got it all right and then recited back the exact directions in order on the paper.)

LEAVE ME ALONE WITH A PAPER AND I MEMORIZE IT.

I should have known this because he has done this before with a map of the United States and the state capitals.

HAS TO BE A SINGLE PAGE.  I HAVE TROUBLE BECAUSE I CANT LEAD WITH MY EYES TO MORE PAGES.

“Do you want more wall posters?  We can go to Michael’s and get the ones that we had from the old house framed too.  What if I get you a poster of something like the Declaration of Independence?”

REALLY LIKE THAT IDEA.  EACH DAY I HOPE SOME MORE POSTERS ARRIVE IN THE MAIL.

“So your birthday is coming up.  People want to get you gifts.  Should I tell them that you would like wall posters?”

GIVING ME GIFTS IS NOT SUPER NECESSARY.

“That is kind Ryan, but people are really excited to learn what your interests are and want to buy you gifts.  We have been waiting a while to get you gifts that you really like.”

ALWAYS AMAZED BY THE KINDNESS OF OTHERS.

4 thoughts on “More Baseball, a Request, Baseball Again, and a Revelation”