This past weekend, Ryan participated in a local workshop in the Dallas/Ft. Worth area with ACE RPM, the company that Ryan and I originally started RPM with back in January 2014.  We have seen Erika Anderson of ACE over the past 22 months at local workshops in the Bay Area in California, for a camp at their location in Wisconsin, and I have had consults with her that entailed  me sending a video of Ryan and I working together and she would then give me feedback. 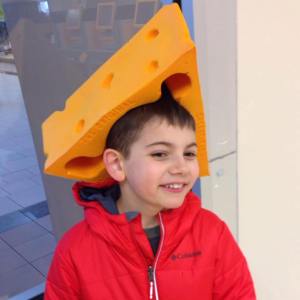 Ryan as a “Cheesehead” in Wisconsin in March 2015.

All of this continued contact has been invaluable to Ryan’s progress.  Erika last saw Ryan this past May when we were still living in California.  She was very pleased with the progress that he has made since them.  Ryan had 6 sessions with Erika over 3 days.

The first day, they learned about Hugh O’Flaherty, who used his status as a priest and the safety of the Vatican to rescue thousands of POWs and an untold number of Jews and other refugees from the hands of the Nazis. She asked Ryan at the end of the lesson if he could think of anyone that he had learned about previously that had taken risks like O’Flaherty and helped others?  Ryan’s response:  MARTIN LUTHER KING.

I told Erika that I was having some trouble with Math with Ryan.  He has continued to tell me that the math that I am teaching him is TOO EASY and that MATH IS VERY EASY TO ME.  I have been warned not to do too high level math with Ryan yet but I know that it is important to continue to have him learn.  Erika suggested that Ryan come up with his own word problem.  She had him select the operation (he chose the multiplication sign) and then he wrote the following word problem and then the equation to solve it:

A LARGE GROUP OF TURTLES TRIED GOING TO THE BEACH.  THREE OF THEM HAD BABIES.  IF EACH HAD NINE BABIES, HOW MANY WERE THERE?

The next day, Erika asked me how Ryan’s creative writing was going with me at home.  I told her that he does very well with Soma, but we really haven’t done much story writing at home.  Erika showed me how to incorporate pictures into creative writing.  She showed Ryan these two pictures and had him select one to write about.  He chose the one at the bottom, but as you will see, he incorporated both of the images.

Ryan’s story:  ONE DAY I HAD FOUND MY WAY FROM THE GREAT LARGE FOREST IN THE SPECIAL MOUNTAINS OF BEAR COUNTRY WHERE MANY HAD DIED, TO THE RIVER OF LITTLE SWAN. GOING INTO THE WATER SHOCKED MY BODY FAST AND MADE ME SCREAM. I RETRIEVED MY CANOE AND GOT IN QUICKLY. HAVING SOME NEW SUPPLIES I DETERMINED HOW MUCH WEIGHT NEEDED TO GET OFF. I HAD ONE DAY TO EXPLORE CANADAS WILDERNESS BEFORE HEADING HOME. IT WAS BREATHTAKING. I TOOK MANY PHOTOS SO I COULD SHARE THEM WITH OTHERS. THEN I HEADED BACK HOME. THE END.

Ryan struggles with handwriting.  He cannot seem to do it without resorting to scribbling.  She gave me some tips to practice with him at home as handwriting is a goal of both Ryan and mine.

On the final day, I worked with Ryan so that Erika could give me feedback.  The key points were to not allow Ryan to use stim words.  He was struggling a bit with it during our session and I was stumped.  This has happened before too.  Her tips were helpful as I was not sure how to break him of these.  It is still a work in progress, but it is better.  Ryan has told me before NOT TO LET ME REUSE WORDS.

In the final session, Erika wanted Ryan to participate in a project by ACE.  They are having their students who have open ended communication participate.  ACE has been collecting photographs from their different travels around the world and they are having the students caption them with quotes, stories, or poems.  Erika had Ryan participate in the project and the two of us loved what he had to say.  You can find it here.

Ryan flew through that one so fast that Erika was going to have him do another one.  He started writing, but then seemed to have a thought and wanted to talk to Erika.  He wrote:  WANT TO FIND OUT WHY I CANT FOCUS WHEN HAVING TOLD MYSELF TO DO SO? LAST TIME I HAD GROUP WITH WILL (He was referring to when he was in Wisconsin and had his first joint session with another boy named Will who is a student at ACE’s school in Wisconsin) I COULDNT GET MY BODY TO REMEMBER WHAT I NEEDED IT TO DO.  HAVE YOU HAD IT HAPPEN TO OTHER STUDENTS TOO?

Erika responded that “Yes that happens a lot to other students too.”

GETTING OUR BODIES TO LISTEN IS HARD.

One thought on “Progress”