I Can Shine Bike Camp was put on last week by the Down Syndrome Guild of Dallas at the University of Texas at Dallas, which is about 50 minutes away from home.  I picked the middle time slot (11:40-12:55) with the hope that we would miss traffic heading there and heading home.  I didn’t really consider the heat factor because I knew that the camp was held indoors.

I found out ahead of time that Lawson, one of Ryan’s friends from Arkansas, had moved from the waitlist to the camp!  They were going to drive in and stay the week in the DFW area for the camp.  The best part, he was in the same session as Ryan!

Randy and I attended the parent orientation on Sunday and we arrived on Monday very excited and nervous.  Ryan was a bit on edge (I could tell) and he got frustrated that the volunteers were trying to adjust his helmet.  One thing that I learned from previous camp/special needs experiences is that Ryan does best with any “gear” that he has to wear if we put it on him right before the time that it is his turn (we tried to do surf camp a few years ago and Ryan could not get past the wetsuit and then the wait and he never was able to get on a surfboard because he could not tolerate the wetsuit).  I mentioned this to the staff and they were on board with this.

We met Regina, Ryan’s volunteer for the week.  She is an amazing young lady who was in her second year of volunteering for the event.  She is one of 8 kids (we had big families in common!) and her youngest brother has Down Syndrome.  He participated in the camp two years ago and she helped him eventually ride independently on his bike and wanted to continue to give back and volunteer.

Ryan got on the bike that was sized for him and he had some difficulty initially pedaling but he was happy to do it.  I was watching from the other side of the gym, trying not to interfere.  They had mentioned that parents could watch from the second floor of the gym,  so Randy and Grace went up.  I did not feel comfortable being that far away on day one, especially since Ryan needs me to communicate (for now).

Emily, the person in charge of the event, came up to me and asked what motivates Ryan.  She indicated that he wasn’t pedaling and would super heroes or counting laps or anything else motivate him?  I explained that he “is motivated” and his motivation is “to ride his bike.”  This wasn’t a motivation issue, it was a body disconnect.  His head knew what he was supposed to do but his body was not getting it.  She asked if it would help if I walked with him and does he respond to you?” I gladly replied yes.

I walked with Ryan and kept reminding him to pedal and I gave him soft taps on his thighs and feet as physical prompts.  He eventually got it!

Days 2 and 3 saw more improvement.  Ryan was gaining confidence.  He still needed some verbal reminders to pedal and Regina worked on steering with him.  He gained a lot of confidence on Day 2 after riding the Tandem Bicycle.

On Wednesday, we invited Lawson and him mom Leslie and our local friends Diego (who is an RPMer) and his sister Sofia and mom Daisy over for a pool party. Everyone had a great time enjoying the pool.  Sofia and Grace get along so well and us moms had a great time too.

All of the kids! 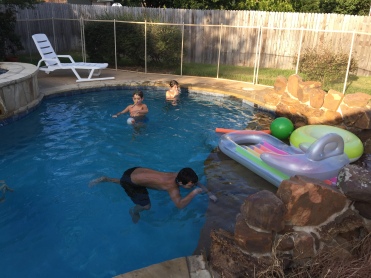 Day 4 was okay, but I noticed a difference in Ryan.  He had a very serious face most of the session and he seemed to be on the verge of crying.  I asked him what was wrong.

TOO WORRIED ABOUT LAWSON.

Lawson was not on the bike as often as Ryan was.  I have known Leslie for a while now and Ryan and Lawson first met in April, where they had a joint RPM session with Lenae Crandall when she was in town.  He is fluent on the board with his mom and Lenae, but Lawson certainly still had evident anxiety during the sessions.  Ryan is very empathetic and often “feels” too much.  He knew that Lawson was having a hard time, and Ryan wanted to help.

He then spelled:  CAN YOU HELP HIM MOM?

I explained to Ryan, “Leslie knows Lawson best just like I know you best.  Lawson is doing as much as he is able to.  It is wonderful that you are worried about your friend, but please remember that he is okay and to try and focus on yourself.”

We tried to keep going, but Ryan was still distraught.  I held the board again and he spelled STILL TOO WORRIED ABOUT LAWSON.  I asked him if it would help if I asked his mom if he was okay.  YES.

I went over to Leslie and mentioned to her the conversation that I had with Ryan.  She told me to tell him that Lawson was okay and that he was a good friend.

I relayed the message to Ryan and he did better but I could tell it was still affecting him.  He did do well and the tandem bike helped and he was able to go a bit on his own with just Emily spotting the handle.

We went to lunch with Leslie and Lawson after bike camp that day and Lawson was super calm and chill.  Ryan on the other hand was a bit hyper.  Leslie explained to us that this is how Lawson is most of the time and that his anxiety was just getting the best of him at bike camp.

After lunch, we picked up Ryan’s bike from the bike shop (finding the right bike for Ryan was the most stressful part of the week!) and we brought it back to camp.  We then met Leslie, Lawson, and two more friends, Mary Lynn and Austin at a trampoline place called Flight Deck.  The kids had fun jumping around.

Ryan and Grace in the tarp area.

Mary Lynn with Austin and his letter board, Leslie, and Ryan.

Until Mariah Carey came on.  For some reason, Ryan tolerated the music until this happened and then he had difficulty.

IT IS TOO LOUD!

He was able to calm down, but it took a while.

Later that night, Ryan was sad again.  He spelled:  STILL TOO WORRIED ABOUT LAWSON.  I LOVE HIM SO MUCH AND IT IS TOO WORTH IT FOR HIM TO COME HERE TIME AND TIME AGAIN.  Ryan was very emotional writing this.  I believe that he thought that Lawson would stop coming back to the DFW area because of his experience with bike camp.

I messaged Leslie and she reassured Ryan that they would be coming back and that hanging with friends was the highlight of their trip.

The last day of bike camp was here and I was a bit nervous again.  I was hoping that Ryan would be able to focus on improving.

Well we got there and he had difficulty. He saw that Lawson was not able to get on a bike, and Ryan’s demeanor changed.  You could just tell. The volunteers and staff could tell too.  I explained to Ryan that it took me many years to realize that you can’t help everyone and sometimes you really just need to focus on yourself.  I also explained that this camp was the time to do that as opportunities like this are not always available and that he needed to make himself a priority and that it took me until adulthood to realize that it is important to take care of yourself too.

Emily came up to us and suggested that we head outside to practice so that Ryan could just focus on himself.  All of the kids would be heading outside during the session to practice, so we just headed out a bit earlier than everyone else.  Randy and Regina took Ryan out and I had to pay for the handle that was installed on Ryan’s bike so I was a few minutes behind them.

TOO HARD TO CONCENTRATE.  STILL WORRIED ABOUT LAWSON.

So out of sight out of mind does not apply to Ryan.

I had this thought.  I asked him if it would help if we played music.  He spelled YES.

I pulled up Spotify on my phone and cued up Celine Dion.  It started playing and Ryan started pedaling!  He took off and I ran with him with my phone, with Regina spotting him.

At the end of the session there was a medal ceremony and Ryan spelled that it was MEANINGFUL TO ME TO GET THE MEDAL. 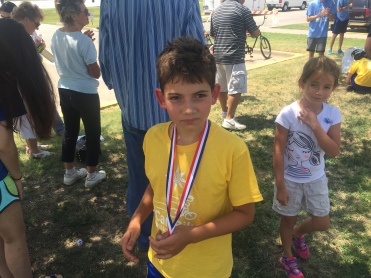 Ryan and his proud sister. It was hot! 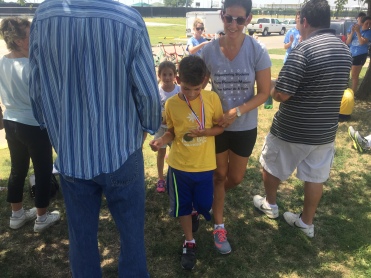 Ryan and his proud Mom.

We had lunch with Lawson and Leslie again and they joined us for another pool party that afternoon, as did Diego, Daisy, and Sofia.

Later that night, I asked Ryan how he was able to get past his worries.

ACKNOWLEDGING CELINE DION FOR THAT.  PLEASING MUSIC HELPED ME.

He then spelled:  A BEST FRIEND ADDED BY ME THIS WEEK.

9 thoughts on “Bike Camp and a New Best Friend”