Update:  Ryan’s story aired tonight and you can find it here.

We had a big day in our household on Tuesday.  Kristin Dickerson of NBC 5 in the DFW area came to our home to learn all about Ryan and our blog.  Ryan will be featured as a part of a series called “Courageous Kids” which is about 6 stories of local children with various special needs who have made incredible accomplishments. Ryan’s segment is scheduled to air on Tuesday, September 19th during the 6:00 pm news broadcast and will be about 2.5-3 minutes in length.

Kristin and Mike Heimbuch, photojournalist, arrived at 10:30 am and we sat down and talked for a bit.  Ryan was very excited about the opportunity and asked if we could get started.  We started in our classroom and Kristin asked Ryan some questions.  Without spoiling too much of the actual segment, Kristin asked Ryan about the blog, what it was like before he could communicate, and what he wants the parents of children with autism to know.

After a while, we took a break and Mike captured some footage of Ryan, Freckles, and me walking outside.  We then spent some time reading in Ryan’s room (we do that everyday for multiple periods) and they recorded that too.

Throughout this whole time, Ryan answered questions using his letter board.  I could tell he was getting tired as he began to rest his elbow on my leg when he was pointing.  It is tiring to spell out all of your thoughts letter by letter.

Kristin then wanted to get my perspective on things, so I sat with her for an interview.

The last footage that they wanted to get was some of us actually blogging so we sat down at the desk to start.  I asked Ryan, “Since we are definitely going to blog about today, do you have an idea for a title for this post?”

LIKE TO THINK IT SHOULD BE RYAN THE TV STAR.

So I typed that in.  He also mentioned TOO REALLY READY TO BE ON TV.  IT WAS REALLY AWESOME.  IT REALLY LIVED UP TO MY EXPECTATIONS.  DEARLY I AM SO GRATEFUL FOR THE OPPORTUNITY.

Then the tables were turned.  Ryan was back to the interviewer.

Can you tell he loved interviewing them?

Ryan and Mike. They got along so well!

Mom taking the shot from above. 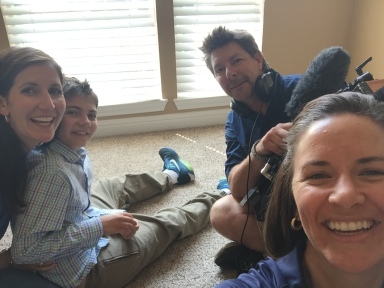 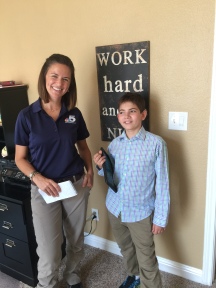 Kristin and Ryan, both skilled interviewers!

Ryan was amazing.  I am always proud of him, but to be 10 years old, and to have handled the pressure with such ease, I was in awe of him.

When we sat down for the actual blog, without cameras, here is what Ryan had to say:

DEARLY LOVED IT MOM.  MIKE IS FEELING TOO MUCH REALLY LIKE MY FRIEND NOW.  EVEN THOUGH I WAS NERVOUS, HE PUT ME AT EASE.

When I asked Ryan about the camera, Ryan replied CAMERA WAS DISTRACTING AND I GOT A LITTLE FRUSTRATED BUT I GOT MY POINTS ACROSS.

KRISTIN IS PRETTY AND NICE.  SHE CARES ABOUT MY STORY.  THE QUESTIONS WERE GOOD.  TOO LOVING THAT SHE THINKS THAT I AM A GREAT SPELLER.  BOUND TO STAY IN TOUCH WITH HER.

CARE TO THINK I AM HELPING OTHERS BY PUTTING MYSELF OUT THERE.  I AM FINDING AREA OF EXPERTISE IS MOSTLY ADVOCATING FOR THOSE WHO DO NOT YET HAVE A VOICE.

I asked Ryan how he was able to handle the pressure and his nerves.

MY NERVES ARE IN CHECK BECAUSE I AM TOO WANTING TO DO IT.

I mentioned to him that there are other RPMers who can communicate like him but that their nerves would likely hinder them from doing things like this or speaking in front of a group.

DIVERSITY IN ADVOCATING IS GOOD.  TOO THINKING THAT OTHERS CAN HELP ALWAYS IN OTHER WAYS BY WRITING AND RECORDED LESSONS.

I then asked him, “Is there anything else that you want to add?”

CAN WE THANK MIKE AND KRISTIN?

I told him that of course we could include that. I asked if he wanted to have a viewing party when the segment aired.

We will update our readers when Ryan’s piece is broadcast.  Here are some links to what we talked about with NBC 5:

Canine Companions for Independence, the Organization that we received Freckles from

And we want to leave you with Ryan’s mission for his blog:

RESPECT FOR ALL AUTISTICS.

7 thoughts on “Ryan the TV Star”