We made it!  We left for Toronto on Thanksgiving Day and arrived without incident that night!  Grace and Ryan did excellent traveling and even endured the very long Customs line once we reached Canada.  Most of you remember that in September, Ryan’s seizure occurred once we made it to the front of the very long security line at DFW Airport.  Once we were in the Customs line, I was nervous because Ryan was moving slowly and I had to physically help him up from squatting a few times in order to keep him going.  While we were in the line, Ryan was able to say that he was FEELING REALLY STRESSED.  Later, when we sat down to write this post, I asked Ryan about it.  He said that MOSTLY LONG LINES STRESS ME OUT.  MOSTLY FEEL CLAUSTROPHOBIC.  I asked him what I could do help and he said NOT SURE.

We reached the Baileys’ house by about 8:20pm on Thursday evening and spent a little while there.

Then we went back to our hotel to rest. Ryan said that the HOTEL WAS DECORATED NICELY.

Friday morning, we met Fox, Ruby, and Lisa Bailey and Brayden, Hailie, Alexis, and Jen Morrison at the Butterfly Conservatory. 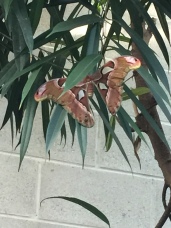 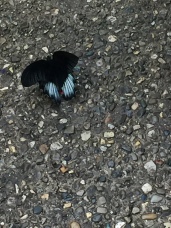 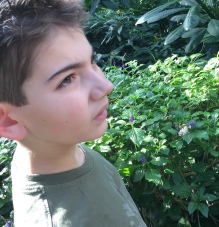 Can you spot the butterfly?

Can you find it here?

DEARLY I LOVED IT.  BUTTERFLIES ARE BEAUTIFUL.  IT WAS REALLY COOL TO SEE SO MANY.

After that, we had lunch at Harvey’s and then later that night went to the Baileys’ for dinner.  Then it was time for the Hockey Game! 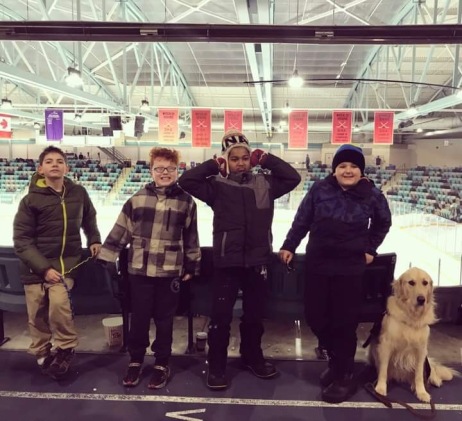 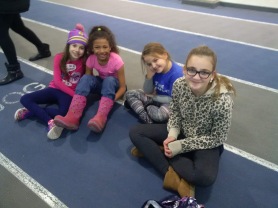 We went to a local university hockey game for the Laurier Golden Hawks.  When we got there, there was a table where you could pick up some information and I noticed that they had something called Chuck the Puck set up on it.  I asked about it and I was told that you could purchase a puck to throw towards the center of the ice after the second intermission.  Whichever fan’s puck got closest to the center of the ice would win.  They had a promotion of 3 pucks for $5.  I saw that each puck was numbered and I thought that it would be fun to do this with the kids.  Grace’s favorite number is 37 so I got that one for her (she had already gone to sit down with the girls).  I asked Ryan what number he wanted.  He said 39.  That was already taken. He then said 38.  So for simplicity I picked 36.  I paid for them and wrote my name next to the spaces for those numbers and took our pucks to our seats.

The game was fun to watch and fast paced.  It was a very laid back atmosphere and the arena had a track around the outside of it for people to walk on.  This was helpful when the kids needed a break from sitting.

Well everyone was doing great watching the game.  We got to the second intermission and the announcer told us it was time for Chuck the Puck.  We were not sure exactly where to go but we knew that it would be difficult to even get the puck onto the rink in the seats that we were in.  We all got closer and the announcer said that there was only a short amount of time to still participate.  I chucked mine and then helped Ryan cock his arm back to chuck his and then we heard the countdown start, “10, 9, 8,7…”  I looked at Grace and she was not sure what to do.  I had her get closer and told her to throw it.  She threw it just in time. I had no clue where any of the pucks eventually landed as a result of us hurrying.

Then a girl on ice skates went out to the center where all of the pucks were and picked the one that was literally in the dead center of the rink.  She showed the announcer and he said, “The winner is number 38!”

I paused and said, “That’s us!  That’s Ryan’s!” I started jumping up and down and hugging him!

The announcer then said, “It looks like we found the winner since I see some jumping up and down.  Number 38 is Stephanie Curry.”

At that point I had wished that I wrote down the kids’ names beside their pucks but I just assumed that the name would be used to verify the puck.  I don’t think it mattered to Ryan because he was excited!

We went over to claim his prize and he won a Laurier sweatshirt and t-shirt.

Ryan had this to say:  HAPPY THAT I WON.  I CAN’T BELIEVE IT STILL.  REALLY FEELING TOO PROUD OF MYSELF.

The next morning, we drove back to Toronto to visit the Ontario Science Center.  The drive was about an hour and a half each way and I had gotten Harry Potter and the Prisoner of Azkaban on Audible in order to listen to in the car.  We have already read all of the books in the series but we are currently listening to them again (first time via Audible) during car rides.

“Is it okay to hear the Harry Potter books over again?  I hope that it is not too redundant. I always catch new things the second time I read books.”

YES BECAUSE THAT BOOK SERIES IS MY FAVORITE OF ALL TIME.

One of the first things that we did when we arrived was we went to an interactive session/show, The Extreme Universe, in the Planetarium.  We waited a little while for it to begin so we got to explore.

At one point, Fox was sitting on a bench and Ryan went right up and moved him over to sit next to him.  I have never seen him do that before and I thought it was great.  Once we were allowed in, we were towards the back of the line so we sat along the sides of the planetarium.  The show took place above on the ceiling, so this worked out fine.  Ryan sat through the whole 35 minute show which was awesome.

We walked around more and got some lunch.  During lunch, I watched Ryan giving Brayden what I call, “the stare down.”  This is a good thing.  He just kept looking at him and smiling.  It did not matter if Brayden looked back.  Ryan often does this with people he likes and cares for.

Next we checked out some more exhibits.  We spent some time in the Maker Bean Cafe and we made some creatures out of wood and construction paper.

In one of the interactive areas, there was a machine that used wind to blow small pieces of paper around and through a long tube towards the ceiling.  As we were walking passed it, I knew that we needed to stop.  Ryan loves scattering paper.  This was right up his alley.

Later, we went to an IMAX movie at the center.  Ryan did well, but I think that I was pressing my luck after an hour and a half car ride and a 35 minute show.  He was a bit squirmy, especially toward the end.

Ryan had this to say about the science center:  LOVED IT.  THE PLANETARIUM WAS COOL.  IT DID FEEL LIKE AN RPM LESSON (I mentioned to Ryan since the woman was talking and giving us short bits of information and asking the room questions, it felt like an RPM lesson to me and was very educational.) HAPPY THAT I SAT SO WELL.  THE IMAX MOVIE WAS NOT AS COOL BUT I ALWAYS LIKE LEARNING ABOUT SPACE.

So with that, we started towards the hotel and stopped at Panera Bread for a yummy dinner on the road.  We did go back to the Baileys’ house after our trip back because, who wants to just hang in a hotel room when there are friends to spend time with?

There is a lot going on this month and I hope to post Part 2 later this week!  We have a lot more to share about this awesome trip!