Ryan and Grace are good travelers.  We have been doing it for a while now, especially when we lived in California and all of the rest of our family lived on the east coast and in Texas.  But still, Ryan has autism and with autism comes the repetitive behaviors and stims that he can’t always control.  Given this, I would have never dreamed that a passenger would have passed me this note. 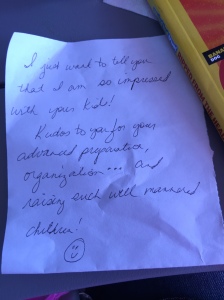 I almost fell out of my too tight airplane seat!  What a blessing to receive something like this to start our weekend!  Of course this was about an hour into the 3.5 hour flight, so I basically held my breath for the remainder of the flight (and the kids did do great!)

The following day, we met up with a mom named Julie that I had met at an autism conference in St. Petersburg, FL (we both lived there at the time) almost 5 years ago.  She and I have kept in touch through Facebook all this time and we got to see her last weekend at the Autism Education Summit.  She recently moved to Cape Cod over the summer and she picked us up and took us to her favorite gluten free restaurant and bakery and Ryan, Julie, and I had a very relaxed and delicious lunch!  Ryan spelled out I REALLY LIKE JULIE as we were enjoying each other’s company.  It was so nice to spend the afternoon with someone who “gets it” and she was an excellent hostess!

Next up was the rehearsal and dinner.  This was Ryan’s first chance to shine with all of our family members.  He was amazing.  He conversed with many different people in a very loud restaurant setting.  He often had to take breaks because he was having so much difficulty with the noise, but it did not discourage him.  He used his noise canceling headphones some of the time and took walks with various family members and spent some time in a quieter area of the restaurant.  Randy was flying in from Chicago as he had a work conference that he needed to attend.  We met up with him at the after party at the hotel lounge.  Ryan continued to spend time with family and he seemed happy.  We got back to our room that night and he was having a lot of difficulty settling down.  I asked him what was going on.

SO I AM HAVING TROUBLE TRYING TO SLEEP BECAUSE I  AM SO EXCITED ABOUT MY NIGHT TONIGHT.

He was proud of himself and so were we.

The next day was the wedding.  He couldn’t contain his excitement either.

SO MOM I AM READY TO GO TO THE WEDDING. 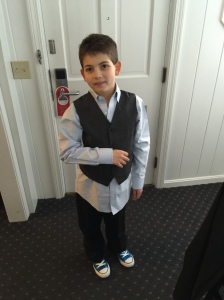 “Ryan we still have to wait a bit longer as the ceremony is in an hour.” 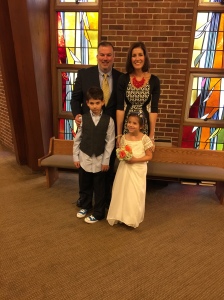 It was a Catholic Mass and Ryan was on his best behavior.  About 40 minutes in, he spelled:  NEED TO LEAVE NOW.  Randy took him out for a walk.  Again, the significance of this is great as he lasted that long and was quiet for the ceremony and was able to calmly ask to leave.

Now time for the party.  Well, he did great again.  He conversed with people within our family, friends, and some people whom he had never met but had read his blog.  He answered questions.  It was loud.  He still did it.

He was very affectionate with family, often giving many spontaneous kisses throughout the night. 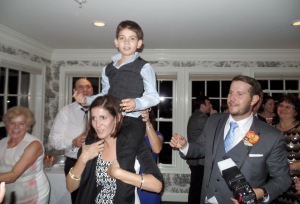 And danced some more. 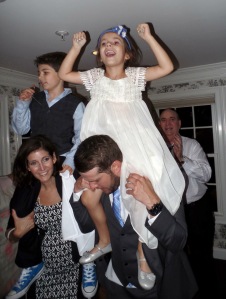 And on top of all of this, there was this incredibly, unbelievably kind gesture by the bride and groom. 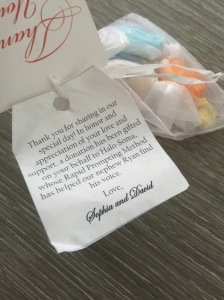 How can you not be moved to tears by a gesture like this?  I have dreamed of the day of Ryan being able to communicate with our family.  Many, many dreams of this.  At one point, I hesitate to share that I was not sure if this would ever become a reality.  Well, Ryan has exceeded my expectations and then some.  I think that he blew people away.  He was not only able to communicate, but he was able to communicate so maturely.  He was told that he is “so smart” and “funny” and “amazing.”  He was spelling so fast that it was hard for everyone to keep up (including me at times!).  I can honestly say that this weekend was one of the best of my entire life.

We got back home and Ryan was not feeling his best on Monday morning.  His stomach was bothering him.  As a very pushy, excited mother, of course I wanted to hear all about what he thought of the wedding.  He was barely able to spell during the lessons due to his stomach issues, so I backed off.

Later that night, I picked Ryan up and told him how much fun I had at the wedding and that I was so proud of him.  After I put him down, he started to get very sad.  I asked him what was going on.

STRONG MOM, I HAD THE TIME OF MY LIFE AT THE WEDDING.

“Ryan, there will be more weddings.  You have another aunt, two uncles, and many cousins who will get married.” 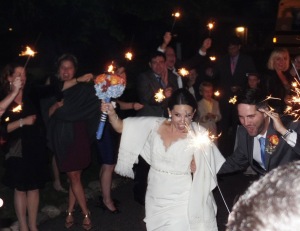 The beautiful Bride and Groom exiting the party!

8 thoughts on “The Wedding”