Ryan turned 9 years old last Tuesday.  We started the day with some school work and went to one of his favorite local parks where they have a zip line for disabled children that does not require them to hold on for the entire ride. 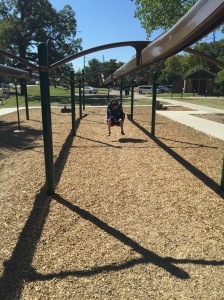 Ryan has music lessons every Tuesday, so we had that as well.  Once Randy and Grace were home, we ventured out to Ryan’s favorite restaurant, Chipotle (we only recently found this out on our trip to Cape Cod when after we landed we were trying to figure out where to grab a quick bite to eat and while we were in the car Ryan spelled out MY FAVORITE RESTAURANT IS CALLING MY NAME–CHIPOTLE).

Yes that is an entire bowl of just barbacoa…..hey it’s was his birthday!

Our plan after that was to go to Petco to pick up new betta fish for Ryan and Grace.  We got to Petco and went over to the betta fish display.

“Which kind of betta do you want, Ryan?”

I WANT A HALF MOON BETTA.

“Here are the choices for colors gray, red, and blue.”

I AM GOING TO PICK, CALL ME CRAZY, RED AGAIN.

Randy and I were dying laughing.  I had no clue where he was going with that spelling until he was done!

I asked him if he had already picked out a name.

MARGARET TWO. (For those of you who don’t know, Margaret was the name of Ryan’s first betta fish in California and he was a red half moon betta.  You can read more about that here.)

We went over to the accessories and Randy was looking at the gravel for the tank.  He asked me to bring Ryan over.

Randy explained, “Ryan we have different choices for color of gravel.  We could do blue, gray, multicolored, red, black.  We could choose any of these here.”

I CAME HERE FOR FISH.

Again, we couldn’t stop laughing.  Ryan takes after his dad as that is a total “Randy” response!

We brought the fish home and needed to run the tank for 24 hours before adding the fish.  We had some cupcakes at home and had a great rest of the day.

The next night, we moved the fish to the tank with the divider.  If you are familiar with betta fish you know that the fish are also known as siamese fighting fish.  They are not supposed to live together.  We purchased this specialized tank with the divider for the two fish.  Once we moved them into the tank, within 10 minutes, they were both on the same side.  Grace and I panicked and Randy came in and moved Margaret Two back to his side.  Margaret Two had lost part of his fin.  I googled it and I learned that the fins could grow back.  I was still concerned as I did not know if we had a faulty tank or if there were problems with this particular model.  They seemed to be okay though.

As part of his birthday, I wanted to take Ryan to the movies again.  Many of you know that we first tried to do this last spring and it was successful although Ryan did not make it the whole movie.  Cinemark was very kind and gave us passes to try again.

The flash got him!

On Thursday, we went to see Hotel Transylvania 2 as it was the only PG movie playing around here.  He spelled out what he wanted to the concession workers: YES TO POPCORN.  YES TO WATER.  The young woman who took our tickets spoke with him.  I mentioned to her that it was a special occasion for us to go to the movies.  She asked him why he came to the theater.  SO I AM CALLING IT MY BIRTHDAY WEEK CELEBRATION.

Ryan did well again.  We stayed for for a total of an hour and a half (with previews as he wanted to see them) and he spelled NEED TO LEAVE NOW.  We did.  As we were leaving, one of the young men from the concession stand asked if we made it the whole movie.  I told him that we made it most of it.  He asked Ryan his thoughts on the movie.  NEXT TIME NO CARTOONS.

Saturday morning we slept in a bit.  Grace came into our room and said, “Mom, Margaret Two is kind of just resting in the tank.”  I was half asleep and I told her not to worry about it because he was probably tired.  Randy went out to the kitchen and came back and told me that Margaret Two was dead.  I was angry and sad at the same time.  We had to tell the kids.

Ryan spelled with the board:  SO NOT SUPER MEANINGFUL TO ME BECAUSE I WANTED A BLUE FISH.  Both Randy and I were surprised by his response.  I told Ryan that I would call Petco and that we would go over and pick out a new fish.

About 5 minutes later, I noticed Ryan just staring at the blank screen of his iPad.  I asked him if he was okay.

SO MOM I AM SUPER SAD ABOUT IT.

We got to Petco and of course it was a Saturday and they had dogs from one of the local shelters there to adopt.  It was noisy and Ryan was distracted.  He was very interested in the dogs.  I asked him what kind of fish he wanted.

I WANT A HALF MOON BETTA.

“Okay and do you still want blue?”

We got it and the manager Julie (who I spoke with on the phone) very graciously exchanged it for us.  There was a leftover credit as the new fish was not as expensive as Margaret Two.  She asked if we wanted to pick out a plant and I told her that it was kind of her to exchange it and it wasn’t necessary.  She said well there is extra money and we could donate it or get something for the tank.  I said to her, “I will ask my son.”

Ryan was a short distance away but did not seem to be paying attention.  I just held up the board and he spelled:  DONATE IT.

Both Julie and I were a bit surprised as neither of us thought that he had heard the conversation.  He then spelled:  I AM ALWAYS LISTENING.

Julie then asked Ryan if he had a name picked out for this fish.  I had avoided asking him as it was so loud and noisy and I figured it could wait until we got home.

This post ran a little long so I am dividing it into two parts.  Part 2 will be all about the birthday party from Sunday.  Here is a sneak peak of what is to come!