If you remember, in a previous post found here, Ryan mentioned that he wanted to have his party at North Richland Hills Fire Station #1.  We set that up several weeks back and planned for a Sunday so that all of our local family (Granny, Mark, Aunt Jennifer, Uncle Patrick, and cousins Jillian and Elizabeth) could make it.  Unfortunately, we have not really made too many friends here yet.  We invited two families with autistic children who communicate with RPM, but both children were not feeling well that day.  So we had our family and Ryan’s local RPM provider, Adriana, attend the party.

The only picture of the party that I got and of course the decorations are behind me.

We hung out for a while as we were scheduled to have a tour of the fire house once the firefighters returned.  Ryan did not seem pleased.

SO MOM IT IS BORING.

He was right.  It was a lot of us just hanging out and eating the snacks and chit-chatting.

And then, Officer Hodges arrived.

He was introduced to the family and the small talk continued.  I then suggested that maybe we should do some sort of game (which of course I did not bring.)  Officer Hodges to the rescue!  He had the game/app “Heads Up” on his phone.  This game is much like charades but in reverse.  You pick a category and hold the phone over your head and the other players try to give you  clues to help you figure out the word.  It was a ton of fun, but I could see that Ryan was still not involved.  I then suggested that he take a turn.  He agreed.

And he blew everyone out of the water.  He got all of his words right, some of them with just one clue given (things like magic wand, Goodnight Moon, and other ones that I can’t remember now and neither could Ryan).  He was at a disadvantage as it was timed and he had to spell out his answers, but in the two separate turns that he had, he got all of the answers right!

So that perked him up.

And he opened gifts.

And he had cupcakes.

And then, Officer Hodges told Ryan that he had his gift for him.  He explained that he was going to take Ryan on a ride in one of the fire trucks.  There was enough room for one more adult, so I asked Ryan who he wanted to have go with him, Mom or Dad?

I WANT DAD TO GO WITH ME.

Randy took these pictures when he was in the truck.

And this one as he got out of the truck. 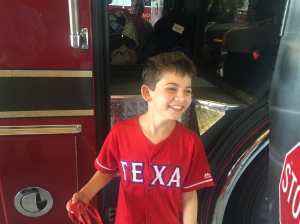 Randy said that Ryan was grinning from ear to ear.  He absolutely loved it.

Ryan was then given a few more gifts from the fire fighters. 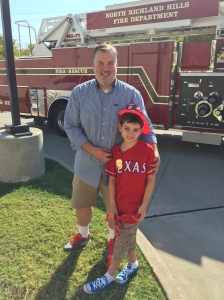 And then was given a very important task.

It was amazing.  I asked him about the party once we got home.

KNOW I REALLY LOVED IT.  IT WAS AN AWESOME DAY.  ONE OF MY DREAMS WAS TO RIDE IN A FIRE TRUCK AND MR. HODGES MADE THAT HAPPEN.

“So would you call your birthday week a success?”

SO NOT SUPER SUCCESSFUL BECAUSE MARGARET TWO DIED.

I CANT THANK YOU ENOUGH FOR SUCH A WONDERFUL BIRTHDAY PARTY.  I LOVED RIDING IN THE FIRE TRUCK.  YOU ARE MY LEADING EXAMPLE OF WHAT I WANT TO BE WHEN I GROW UP.

We delivered it to his office today.

Ryan thanking Officer Hodges at the end of the party.

Just an FYI that I am hoping to get a Friday post up about a behind the scenes tour that we did today that was absolutely wonderful.  Stay tuned.